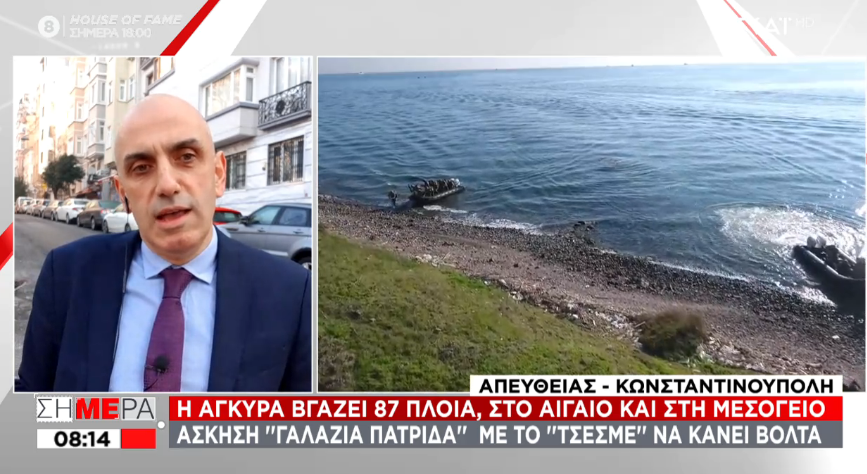 Turkey is setting fire to the diplomatic scene in anticipation of a new round of exploratory contacts, as it plans an exercise called “Blue Homeland” from February 25th to March 7th in the Aegean and Mediterranean.

As announced yesterday, 87 ships of the Turkish Navy and Coast Guard, 27 aircraft, 12 helicopters, F-16, F-4, as well as amphibious forces will leave for the Aegean and the Mediterranean, while the Cesme is in the Aegean. .

At the same time, the Turkish press has risen up against our country, on the occasion of the imminent arrival of American forces in Evros. US transport ships carrying helicopters and armored vehicles, some of which will stay in Greece for exercises, are expected to arrive in the port of Alexandroupolis.

In this context, the front page of Yeni Safak states “Who is this preparation for?”, While Hurriyet publishes an article “Landing of American forces in Alexandroupolis”.

Meanwhile, Turkish President Recep Tayyip Erdogan, visiting ρzmir yesterday, targeted European officials, stressing that they were lying. He added that the EU did not give money to the refugees in Turkey, unlike Greece, to which it gave 3 billion euros.

“The EU gives 3 billion euros to Greece for 100,000 refugees, but for the 4 million refugees living in Turkey it does nothing. When we meet and talk together, they keep telling lies, lies, lies. They tell us so much we gave, that’s what we did. Where did you give them? “You did not send the full amount of 6 billion euros that you promised us with the March 18 agreement,” Erdogan noted.